The Curious Custom Of Sidd Finch 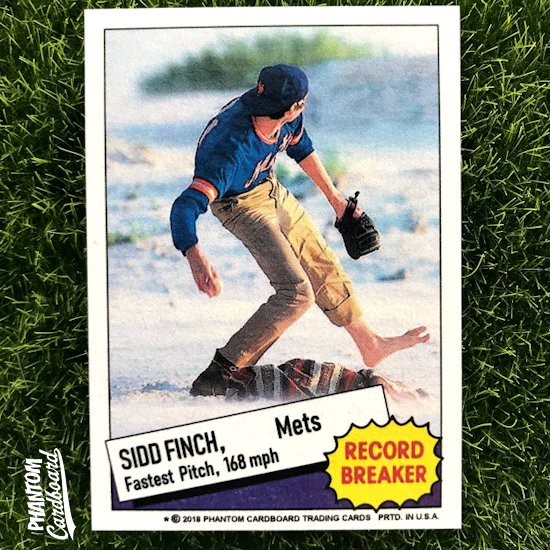 This card came by request by a very good friend to the Phantom Cardboard brand.  Everytime I seem to be running short on card ideas or inspirations something great like this is thrown my way.

Hayden “Sidd” Finch is part of modern age baseball lore.  I was familiar with the story but until this friend reminded me with his request for a card I had totally forgotten about Sidd, if not I would have totally done this card a long time ago.

For any readers out there who may be unaware of Sidd Finch, he is a fictional pitching savant crafted by journalist George Plimpton for Sports Illustrated.

Seeing that the publishing day for Sports Illustrated fell on April 1st -- April Fool’s Day -- in 1985 SI’s managing editor tasked Plimpton with doing a write up about April Fool’s jokes in the sporting world throughout the years.  Not able to find enough good material to put a story together George Plimpton was given the go ahead to create his own April Fool’s leg pull on the SI readership.

Plimpton’s imagination conjured up a story of a highly eccentric guy  who learned the art of the perfect pitch while studying yoga in Tibet.  “Sidd” (a nickname short for Siddhartha) could throw a baseball a blistering record 168 mph with pinpoint accuracy obliterating the previous top recorded speed by 65 mph.  He did this while wearing a clunky boot on one foot and his other foot was bare.

To level up the elaborate nature of the hoax Sports Illustrated photographer Lane Stewart enlisted his friend, a gangly 6’4” Illinois junior high art teacher, Joe Berton, to take pictures as the phenom Finch at the Mets training camp in St. Petersburg, FL with the Mets players and staff playing along.  The story went that Finch was there deciding whether he was going to play professional baseball or pursue the simpler endeavor of playing French horn for which his prowess for equaled that of his pitch. 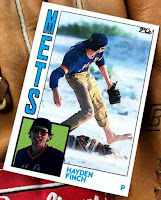 Despite the publication date, the first letters of the article’s sub headline spelling out “Happy April Fool’s Day”, or one of the definitions in the the English Oxford Dictionary for ‘Finch’ being “a small lie” the article caused quite an uproar.  Remember, this is quite a long time before the age of internet sleuthing.  Reactions ranged from beat writers from New York being butt-hurt with the Mets for allowing Sports Illustrated to have the scoop on such a huge story to unnamed team general managers calling the league’s office with concern for their player’s safety stepping into the batting box with a guy throwing 168 mph heat.

The next week SI ran a small article announcing Finch’s retirement from baseball and then finally in the subsequent week after that they let the readers in on the joke.  George Plimpton went on to write a Sidd Finch novel where Sidd reconsiders a career as a professional ball player that was first published in 1987.

The request  was for a 1984 Topps style card.  The PCb reader loves the style, as do I.  It’s always fun to get to use two different images on the same card.  That card was a crowd pleaser to both him and I.

Because the Sidd Finch events are synonymous with that 1985 issue of Sports Illustrated I wanted to also do a card in a 1985 specific design.  With Sidd’s record shattering 168 mph fastball being such a central detail to his lore the thought of a card inspired by the ‘Record Breaker’ subset gave me a smile not unlike the one The Grinch gets when thinking of doing Grinchy deeds.  I used the same iconic photo for both cards of a bare footed Finch in a big wind up on that white sand Florida beach.

Posted by phantomcardboard at 6:33 PM