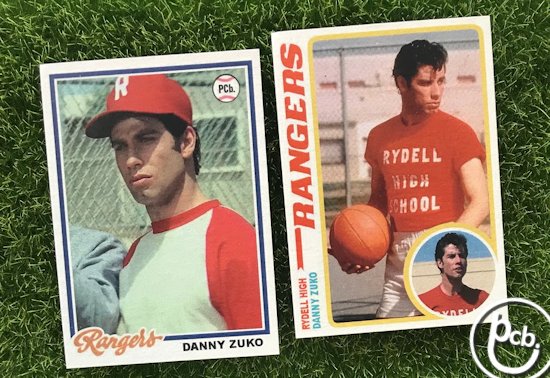 When I was younger I didn’t care for the movie Grease.  The reason I that didn’t was kinda stupid really, I thought it was a “girl movie” since practically every girl claimed to just love Grease.  I mean, after all, it is a musical rom-com.  But, now that I’m older I’m secure enough to admit that it’s pretty damn entertaining.  There’s also no denying that John Travolta is one charismatic son of a bitch with Danny Zuko being a prime example of said charisma.

These two cards are similar to the Rocky Balboa stickball card I did in the sense that Topps made cards in the context of their movie set, but these are more of a fictional sports card of the character.  These two cards are from the scenes where Danny, with the help of Coach Calhoun, is trying to show Sandy that Tom Chisum has nothing on his own athletic prowess. 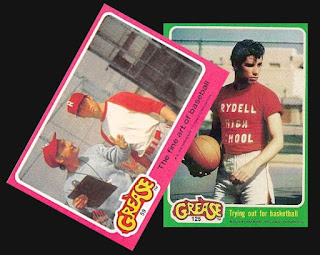 I’ve used the 1978-79 Topps basketball inspired design for my Tony Gwynn college basketball card, but this was my first with using the ‘78 Topps baseball inspired design.  This particular design has always felt a little early ‘80s Donrussy to me, kind of uninspired.  Even with that being said I really like the vintage look it gives this card.

Posted by phantomcardboard at 6:13 PM