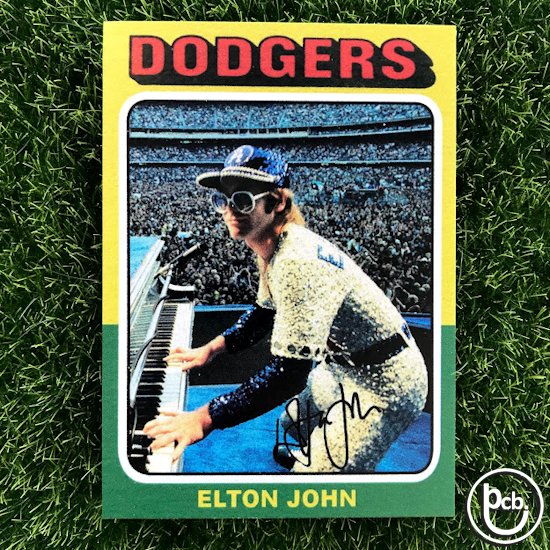 With the Elton John biopic Rocketman being released last month I began to see pictures of Elton John in his sequin Dodgers’ outfit from his 1975 concert held at Dodger Stadium.  On October 25th and 26th, 1975 Elton played two sellout stadium shows that were attended by over 100,00 people.  I thought a blinged-out Sir Elton at the height of his popularity was just right for a custom card.

This is a 1975 Topps inspired card.  I’ve used this template before but this one has a unique addition that the other cards I’ve made using this template did not, a facsimile autograph.  Up until 1982 (I believe) Topps often incorporated preprinted facsimile autographs as part of their card’s designs.  Most of my cards I make are of fictional characters and I wouldn’t presume to make up an autograph for the character so I would just omit that part, but for this one I found a pretty good example of Elton’s sig and added it to this card for that little extra touch.

Posted by phantomcardboard at 6:29 PM