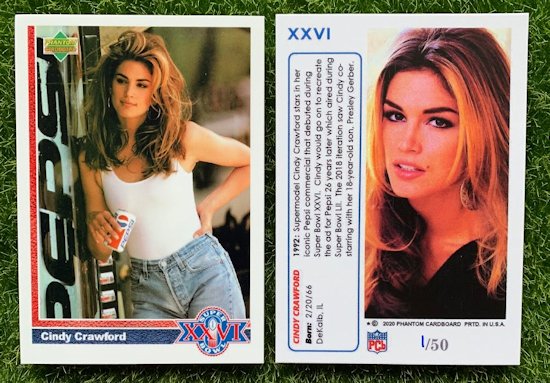 The Super Bowl is viewed just as much for commercials as the actual game.  Let's be honest, most times the commercials are more entertaining anyways.  When thinking about the most memorable commercials over the years there'll always be one that rockets to the forefront of my mind ... Cindy Crawford's 1992 Pepsi commercial.

I vividly remember 12-year-old me being stopped in my tracks upon seeing Cindy climbing out of that red Lamborghini.  I pretty much had the same reaction as the two young boys in the commercial, but for me it had nothing to do with the look of Pepsi's new can.  Even today if I go on YouTube and watch it I'd still have the starry eyed "Wowww" look on my face.  Cindy Crawford is all-time, I tell ya. All. Time.

I've been on an early Upper Deck kick as of late, so I decided to go right back to that well and use the 1991 football inspired design that I repurposed for my Britney Spears halftime card.  Why not 1992 you ask?  I'm just not big on it.  Although I always try to whenever possible match the year of the card design to the year of the card subject I just thought the 1991 design looked better for what I was using it for.  Plus, I could add more cards to the the two I've made already and it could turn into something like a "Super Bowl Memories" mini-set.  We'll see.


Posted by phantomcardboard at 9:34 AM