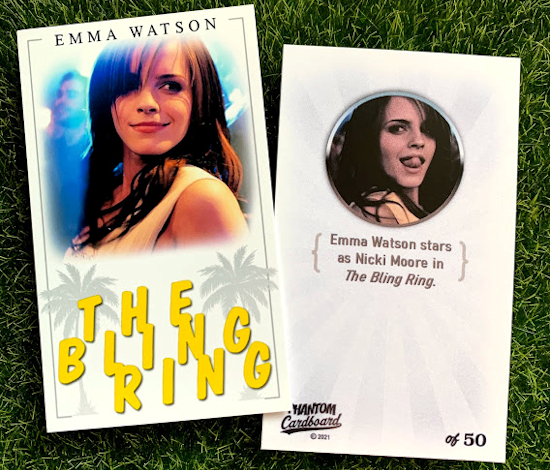 Awhile back I was approached with a request to do a commissioned card of Emma Watson.  The subject line just read "Emma Watson card?".  My first thought was Harry Potter, and I really wasn't feeling like I'd be the right for that custom card.  I know nothing about Harry Potter.  Never read the books or seen the movies and I have no intention of doing either.  On top of that, I knew Harry Potter already had licensed cards produced.

Fortunately it wasn't a request for an Emma Watson Harry Potter custom card.  What the request was for was a card of Emma Watson from the 2013 movie she starred in called The Bling Ring, which I was equally unfamiliar with.  I explained this and how I didn't think I could do the card justice not knowing anything about the proposed card's subject.  When I make cards I prefer to be at least somewhat familiar with the card's subject and from there dive in-depth for details that make the card as good as I can make it.  For me, I feel better if the final result "makes sense" and isn't a picture plugged into a template.  I end up spending a lot of time on the cards I create, so it's important to me that they have an integrity to them.

Explaining this in a roundabout way left the requester unmoved.  For him, it was more about the image and he was leaving it up to me to make something that "looked cool".  Usually, that's something I hate honestly.  I know what looks cool to *me* but if it's a card for someone else I like some art direction as to what *they* envision and we can collaborate some ideas from there.

Although I was totally unfamiliar with The Bling Ring I was familiar with the image that the requester wanted used.  I'd seen the .gif of Emma Watson dancing provocatively hundreds of times.  Okay... I'll make the card.

The movie came out in 2013 and even though that's 8 years ago, relative to the timeframe of the vast majority of my cards emulate, 2013 is "ultra-modern"... to me anyways.  I just couldn't see this making sense on anything I'd done previously, and especially on a vintage cardboard stock.  So, I set out to step outside of my box a bit.

I took this as opportunity to test my creativity.  What I came up with I think could best be described as  Topps' Allen & Ginter card in league with a Panini National Treasures' overall aesthetic. The card is the normal 3.5" height, but I thought it would be fun to bring in the width (approx. 2.09") which I thought worked better to highlight the image.  The back I think is pretty simple, but stylish enough to compliment the front.

In the end the new owner was thrilled with the final result.  Based on his approval I got to thinking that maybe others might like this card as well?  I know that Emma Watson has a pretty big following, so I've decided to offer this card in my store and see what kind of reception it garners.

Posted by phantomcardboard at 8:04 AM