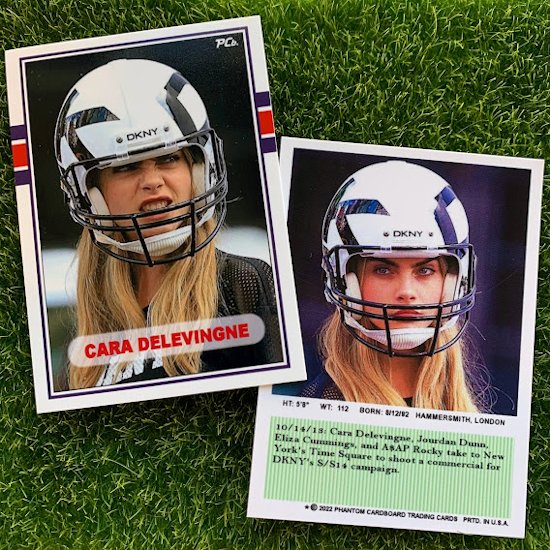 After spending so much time doing the 40 card Idle Hands set I've mainly been making single cards that are made in hopes of a through-the-mail autographs.  Mainly horror movie autograph cards.
Every once in awhile though I'll run across a photo and take a screen-shot it for future card making.  That was the case with this card.  The photo is of English model Cara Delevingne donning a football helmet and jersey from a DKNY photoshoot for their 2014 Spring / Summer collection. 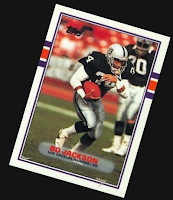 I was originally going to use an Upper Deck football inspired design.  UD is kind of my go to when it comes to female athlete cards (or models dressed as athletes).  The reason being is the photography on a gloss white stock is what Upper Deck was all about when they came out and changed the game in 1989.  I decided not to go with an Upper Deck inspired design just to switch things up a bit, but I did do this card on the same white gloss stock that I would have used for a UD inspired card.
I chose the 1989 Topps football inspired template.  I went this route due to the designs largely unobstructed photo area.  I thought it had just enough of a generic sports card look to make this card make sense.  I chose the color combination from Bo Jackson's card in this set because, well, Bo Jackson, c'mon.
Instead of recreating the '89 Topps football back I freestyled a back that I thought had more of an Upper Deck look for a true hybrid style of the two sports card titans.
Posted by phantomcardboard at 7:41 AM