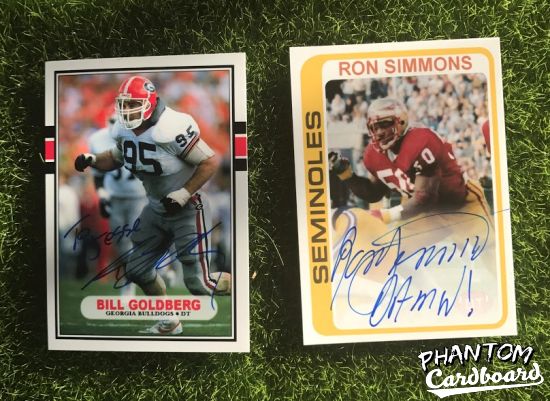 There's a number of big time wrestling names that had football careers prior to stepping inside of the squared circle, and I'm happy to have recently added two of them to my list of custom card TTM successes.  Both all-time greats, and both Georgia residents.  I don't know how significant that second statement is, but I just felt like adding it.  Also, while I'm on a tangent, it seems to me through my TTM requests that a lot of retired pro wrestlers reside in Florida.  Neither here nor there, but whatever.

Bill Goldberg played defensive tackle for the University of Georgia Bulldogs in the late '80s.  He was taken in the 11th round of the 1990 NFL draft by the Los Angeles Rams.  He spent one season with the Rams and then onto the CFL before landing on the Atlanta Falcons from 1992-94 and then shortly after suffered a career ending injury.   Bill was spotted by none other than Lex Luger (whom also had a pre-wrestling football career) and Sting.  Those two encouraged him to pursue pro-wrestling and the rest, as they say, is history.

To stay era-appropriate I chose the 1989 Topps football design, and it's actually the year the photo used was taken.  There's nothing too fancy about the design, but every time I use it I come away thinking it's a clean design and perfect for customs.  I got the card back from Mr. Goldberg pretty quickly and was actually pretty surprised as he had just come off his pretty well publicized comeback with the WWE.

Simmons was taken in the 6th round in '81 by the Cleveland Browns and played for them in the 1981 and '82 seasons.  He then played for the USFL's Tampa Bay Bandits where he was teammates with ... wait for it ... Lawrence Pfohl, aka Lex Luger.

I tried to get Ron's autograph on a wrestling card awhile back and got a note in return saying he's now charging $5 for cards.  I thought that was more than reasonable although I didn't immediately resend my card, and this was before I really started to get going with my custom cards.  I ran across some pictures of Mr. Simmons being a monster for the 'Noles and decided to make a custom feeling fairly certain I'd have a return success.

I chose the 1978 Topps football design, a year right in the middle of Ron's FSU days.  I liked the design because it really has funky retro feel to me, and I was very pleased with the end result.  I think it has a great vintage look. I sent $10 and two card and asked if he could add his WWE catchphrase "Damn!" to his signature, which he did. He also included a signed WWE card of his own, plus the turn around was pretty quick.

Posted by phantomcardboard at 5:52 PM