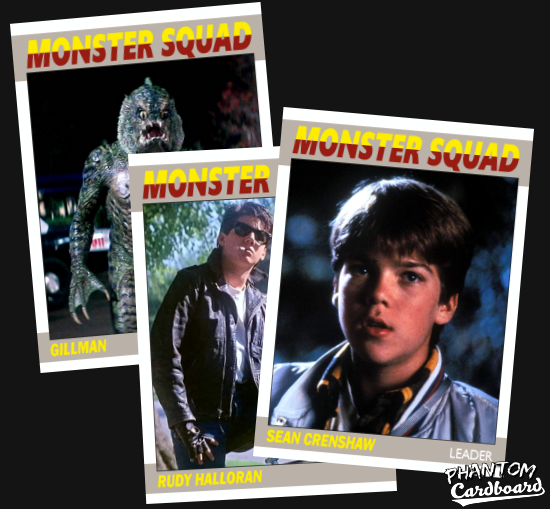 I don't take a lot of custom requests.  It's not because I'm a dick or lazy, it's because I do these cards in my spare time (most of my spare time actually) and if I'm going to devote the time it takes me from concept to physical card it needs to be something I have an interest in as well so I can do the project justice and feel good about the end product.  With that being said, when I had a request for some Monster Squad cards I didn't hesitate much to get right on it.  Plus, in exchange I got some pretty cool VHS tapes -- you see, I'm a geek for that bulky dead media.

I had actually thought of doing some Monster Squad cards for quite awhile.  Any self-respecting '80s kid is a fan of The Monster Squad.  The problem was I like to keep my cards year specific and I just didn't think the wood-grained 1987 Topps baseball cards would fit.  Enter the 1987-88 Fleer basketball design.  It's a simple enough design and could work with most subjects.  It was a win-win.  I got to add another basketball card template to the mix and also create a pretty bitchin' card.

I kept the stripes the light grey and matched the font as best I could.  I stretched "Monster Squad" across the whole card instead on trying to keep it right aligned, and dressed it in the original movie poster font colors.

In the lower right corner is where Fleer listed the player's position. Only the Sean got text there being given credit as the "leader" of The Monster Squad.

I've made three cards in this set thus far and all three went in the mail right away hopefully to be returned autographed.

Tom Woodruff, Jr.  who played the Creature from the Black Lagoon-esque Gillman was a quick turn around, and he's got a great looking signature. 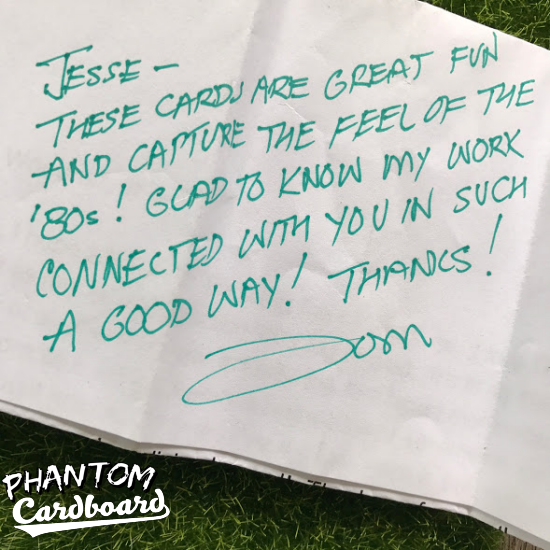 Extra: also check out these sweet Monster Squad customs done by Branded in the 80s!
Posted by phantomcardboard at 4:02 PM