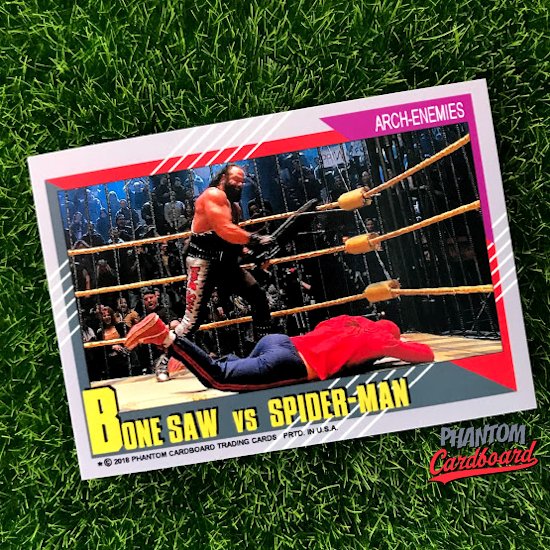 I've been wanting to do a Randy Savage card of some sort for awhile now but just couldn't figure out what type of card. Someone out in cyberspace already beat me to a Randy Poffo minor league baseball card so that was not an option.

The Macho Man was my favorite wrestler growing up. I don't watch wrestling anymore because for me it's just not the same. You no longer have gimmicks, just a bunch of scripted guys going out there using their first and last names. If it's not a real fight it should have more fantasy involved. It's showbiz, it should be fantastical. The character gimmick, in my opinion, were great, and the best ones were the ones that made you believe that that's who that guy really was. Come to find out that the Macho Man character was only a slightly magnified version of who Randy Savage was in real life. The guy was intense and he lived his gimmick as he treated it like an art form. It was tough losing a larger-than-life personality like that; can't believe it's been seven years already. 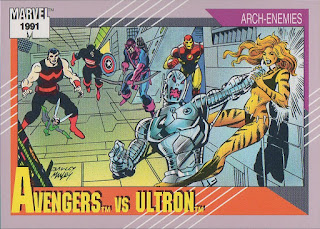 In 1990 I missed series one of Impel's Marvel Universe cards, but I more than made up for that in with the second and third series the next two years. I loved those cards! Even though I wasn't much of a comic book collector (none of the store's around me really had them) I collected the crap out of these cards. What kid doesn't love super heroes? Despite not having the books I knew a lot about different characters stories and origins thanks to these cards. But, for me it wasn't about the backstories it was about the artwork. As a kid my best skill was my drawing ability and there wasn't anything cooler to me than drawing comic book characters. Later, when I was able to find comic books, that fire was stoked even more by the brilliant work Image comics was doing at the time.

The 1991 Marvel cards had a subset called Arch-Enemies which filled you in on the super heroes biggest nemesis' were. I got the idea to do one one these cards for the epic battle between Spider-Man and Bone Saw McGraw in 2002's Spider-Man.
Posted by phantomcardboard at 4:54 AM