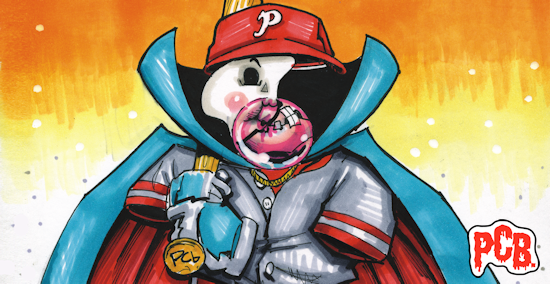 My love for trading cards started with Garbage Pail Kids.  My introduction to the gross-out Cabbage Patch dolls parody came in 1986 the the series' third installment.  From the very first .25¢ pack I was completely hooked.  Flipping through a stack of vintage Garbage Pail Kids these is about as nostalgic as it can get for me.  What I've come to realize that I really didn't as a snot-nosed kid was that I genuinely love the artwork.  Guys like John Pound, Tom Bunk, James Warhola and Jay Lynch are legends of my childhood.

I think it's pretty darn cool that the GPK franchise was revived for a whole community of man-kids like myself to enjoy, plus any younger collectors that may stumble upon them.  There's also a great new crop of artists carrying on the Garbage Pail tradition.  I was lucky enough to link up with one of those artists to help in creating the PCb. brand's second trading card.

Back in the early part of the summer I brought a concept to Mark Pingitore to bring to life for a Jackie Stalegum Garbage Pail Kids inspired card.  Mark has signed a few of the Garbage Pail cards he's done for me over the years and I knew him to be extremely gracious with his fans.  Actually, I find all the artists to be that way for the most part.

What I asked of Mark was for this card to be a mixture of 3 main inspirations.  First was the Jackie Stalegum character, the second was the infamous 1989 Fleer Billy Ripken F*ck Face "error" card, and lastly was the Garbage Pail Kids' Series 5 Hot Rod (#205a) by John Pound.  I've always loved the artwork on that particular card and I'm drawn to the colors in the background.  In my mind that mashup had classic GPK written all over it.  A couple of ancillary details I asked for was for PCb. to be on the bat's knob like the Ripken card and to have Jackie's bubblegum bubble to be revealing part of a skull face.

I had a slight bit of trepidation when commissioning the piece because it was to be done in marker.  Unlike a digital rendering it's pretty much a one shot deal.  There's zero hyperbole when I say I could not be more pleased with the results.  It is better than I would have imagined, and Mark NAILED everything I asked for.  As soon as I stopped drooling all that was left was to make it into a trading card.  If you would have told me as a kid that I'd have a chance to have a brainchild of mine turned into Garbage Pail Kid art I would probably also assumed I lived in a giant mansion and was the star of television shows and professional sports teams.  I'll take the one out of the four. 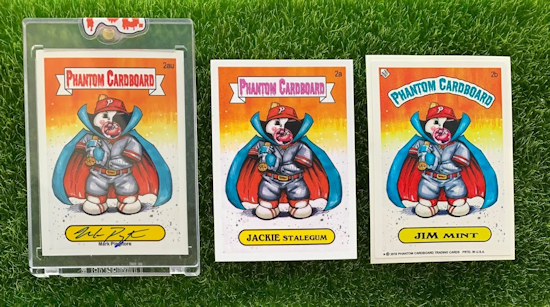 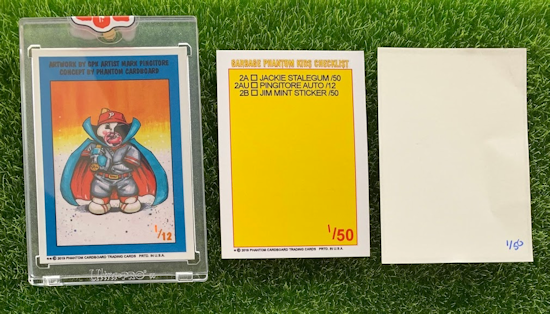 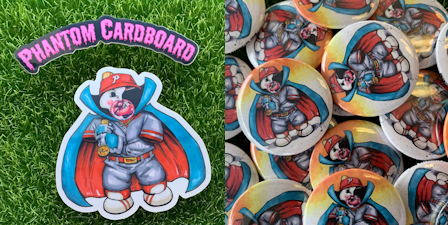 Posted by phantomcardboard at 9:56 AM