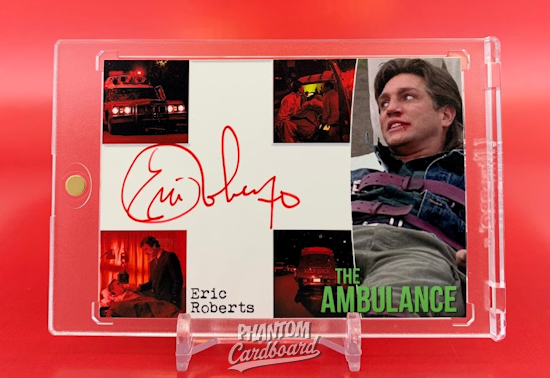 Along with vintage influenced custom cards I create I also enjoy making trading cards to be used for autographs.  I collect a lot of things, too many things.  Autographs are one of those things, especially on trading cards.

A lot of my autograph custom designs do not have a vintage inspired theme, nor are they part of a set.  Not everything needs a set made.  Sometimes I just want to try and get the autograph on something that looks cool to me.  That's the case with this card.

The Ambulance (1990) is a severely underrated suspense/horror movie in my personal opinion.  It's got a great cast with Eric Roberts, Janine Turner, James Earl Jones, Megan Gallagher, Eric Braeden, Red Buttons and Stan Lee -- as himself.  I think this movie probably gets lost in the shuffle because of it's horrible movie covers, be it VHS or DVD.  The U.S. cover looks like a 90's Lifetime drama, but if you take a look at the overseas covers I think more people would have been inclined to take it off of the shelf back-in-the-day if it looked like the one to the right. 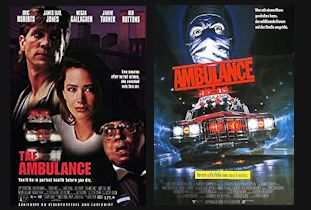 When I made this card I was toying around with making autograph cards that have a horizontal orientation.  Before with most of my autograph customs were your typical vertical photo to white fade signature area.  Those can be cool, but they're usually not all that unique from a design standpoint, they're more about the picture and have a clean area to be signed.  A horizontal design presents a little more challenge because it doesn't really look that great to put the white fade next to the picture.  You have to be a little more creative and design a whole card.

I came up with the idea to use the equal length cross that used to be really prominent on older emergency medical vehicles -- like on the hood of the evil old Cadillac ambulance in the movie-- as the area designated for the signature.  On the four outer corner blocks I used four movie scenes and gave them a red hue to fit with the sinister ambulance theme.  This card is a little different than most horizontal cards being as the design moves right-to-left instead of the other way around.  The ones I've made since this one go left-to-right, but I just thought this one looked better this way.

I had no luck getting this signed thought the mail but I sent a copy in to The Hollywood Show at the beginning of this month when I saw Mr. Roberts was on the guest list of signers.  As requested he signed in red which I just thought really would look great on this particular design.

Posted by phantomcardboard at 12:53 PM

Email ThisBlogThis!Share to TwitterShare to FacebookShare to Pinterest
Labels: Eric Roberts, The Ambulance