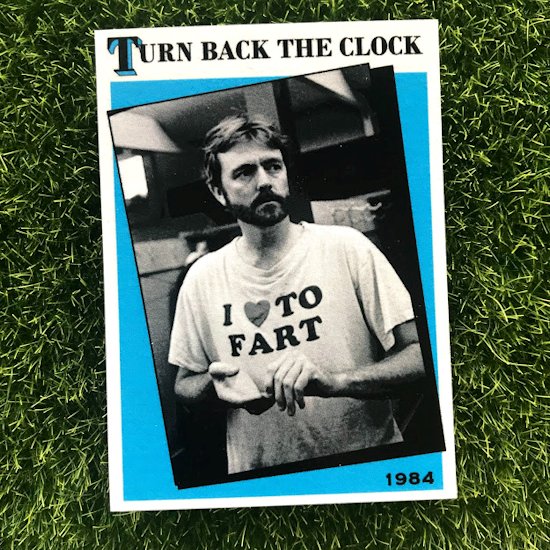 I came across this infamous photo of Bert Blyleven and knew it had to have a card of it's own.

I was having a difficult time chasing down the exact year of this image so I put in an email to a pretty resourceful friend of the site and he was able to find that the picture was taken in 1984 in the locker room of the Cleveland's Municipal Stadium where Blyleven spent the '84 season as a member of the Cleveland Indians' rotation.

Bert has all the statistical criteria needed to be enshrined into the Baseball Hall of Fame, but it took him 13 years before he finally got in in 2011.  Perhaps that can be attributed his casual attitude about busting heat on reporters during post-game interviews?  I have to imagine that's not really going to endear you to any of the writers that vote on who gets in.  To Bert's credit he's never hid his high regard for a good ass blast as he told Big League Stew in a 2008 interview:

I first made this card in the 1984 Topps  baseball inspired template but I just wasn't 100% happy with the final card so I went with my original idea to make it in the style of Topps' long running Turn Back The Clock subset.  Like, "hey, remember that time when Bert Blyleven was photographed in that I love to fart t-shirt?".

The Turn Back The Clock cards remained very similar for a number of years with just the background color changing.  I chose the blue of the 1989 edition to put a couple years between the that and the year that the fateful pic was snapped.

Posted by phantomcardboard at 12:24 PM