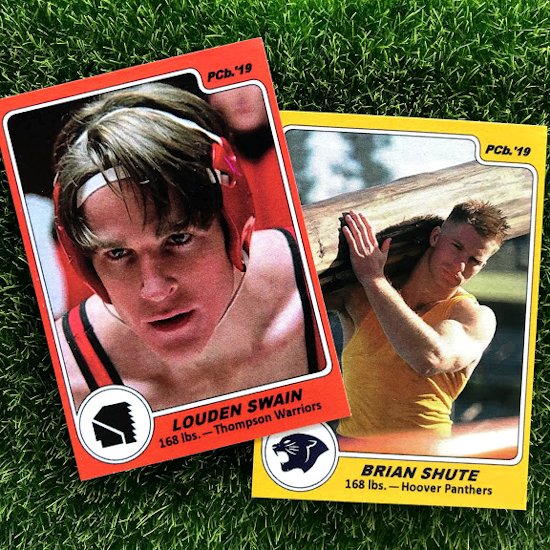 I really, really like the movie Vision Quest.  It's one of those movies where if I'm staring at my VHS collection wanting to watch a movie but nothing is really jumping out to me I could always watch Vision Quest.

I would call Vision Quest a quintessential 80's movie, complete with training montage and kick ass soundtrack.  Any time I watch it I really feel inspired by Matthew Modine's portrayal of Louden Swain.  It's not only for the character's determination but also Louden seems like a genuinely good person, an all-american kid who is still naive and yet to be hardened by pressures and experiences that come with adulthood.

When I started messing around with making cards Louden Swain was one of the very first cards I did.  It was natural because I love the movie so much and since it came out in 1985 which was the first template I recreated for custom cards.  Upon a recent viewing I was inspired to revisit my admiration for the movie and add a Brian Shute card.  At first I was just going to add a card to the Louden I'd already made in the '85 Topps baseball design but I decided to do go a different direction and make two new cards.

I went with a Star Co. basketball inspired design.  For me it has a classic trading card frame and it's also a bit of a cheat since Star used the same exact template for their cards from 1983 through 1986, they would just switch the color of the card's frame for the different NBA teams.  The Star design allowed me to add the the weight class where the player's position would normally go.  That's an important detail of the movie with Louden pushing himself to his physical brink in an effort to test his mettle against the reigning state champ in the toughest weight division.

Fun facts: The actor who played Brian Shute, Frank Jasper, had wrestled but leading up to the movie was doing body building, was closer in 190 lbs ... Jasper literally had to out wrestle the other guy  vying for the part of Shute ...
Posted by phantomcardboard at 4:00 PM