Jose Canseco Would Be Proud 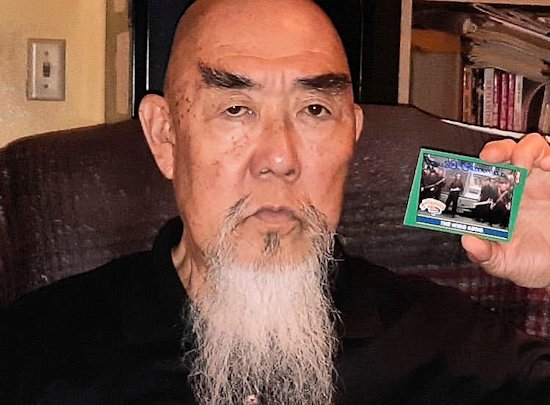 I've always maintained that my cards are both entertainment and a creative outlet for myself, and that even if no one else dug them I'd still be goofing around with them for myself.  The fact that there's also a little audience of collectors that are into the same stuff as I am is something that is not lost on me for one second.  It's particularly exciting for me when occasionally a subject of my cards gives me an attaboy. That was the case when the legendary Gerald Okamura saw my Big Trouble in Little China cards on Instagram.

I'm honored to say Mr. Okamura really got a kick out of the Big Trouble set.  He's a really, REALLY cool guy, and he has a really big soft spot for those in the fan community still carrying a torch for Big Trouble.

Big Trouble is such a visual treat of a movie, so it was really fun making a custom card set for it.  If the movie was handled by the studio correctly in 1986 I believe it would have had an official card release.  Luckily, for me anyways, they dropped the ball on marketing this film.

I wanted to be as inclusive as I could with this card set and it ended making the set massive by PCb. standards.  The card set ended up being 38 cards.  I decided to split the cards into Series 1 and 2 in an effort not to overwhelm fans of the movie.

The first message from Mr. Okamura was him inquiring about his cards in the set.  I was eager to send him the image of the card/cards featuring him in the set.  To my surprise (and embarrassment) I didn't have anything of his Wing Kong "Golden Six Shooters" character, nor any Wing Kong cards for that matter.  Now, I don't normally go back to a card set and add to or improve on it.  There's a couple reasons for that.  The first reason is that my cards have been ever evolving since I started doing this in 2015.  I look at them as time capsules to where I was artistically at that point in time.  So, the Big Trouble set  was the best of me in June of 2019.  If I were making the set today each card would have its own unique card back like my cards do now.  The second reason is that I don't think it would be fair to anyone who has added these cards to their personal collection to have me, in theory, "improve" on something and they still have the 1.0 version and anyone who purchases it after gets the 2.0.  But, even with that reasoning I just couldn't let this glaring omission stand.

I wanted to gift Mr. Okamura with a complete set that included a card with his character.  I got a cool Wing Kong image that includes Mr. Okamura and another henchman favorite, Al Leong. I kept everything the same so this card could slide in nicely to the Series 1 set. 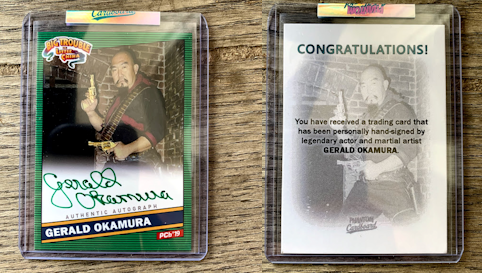 When talking to Mr. Okamura about the cards I mentioned to him that they're designed to take after the 1986 Donruss baseball cards to coincide with the release year of the movie.  Just kind of explaining why the cards look the way they do.  Without missing a beat Mr. Okamura replied "Jose Canseco would be proud".  That blew me away.  I guess I just didn't expect him to comeback with that card knowledge.  For anyone that didn't grow up trading card obsessed, the 1986 Donruss set is most notable for the extremely sought after short-printed Jose Canseco rookie card that saw the future 40/40 man rocking what can most accurately be described as a "dirt 'stache".  I was so tickled by Mr. Okamura's compliment that I asked him to autograph my personal copy of the card with that inscription, which he so graciously obliged.  That card will never leave my collection.  I might even request to be buried with it ;) 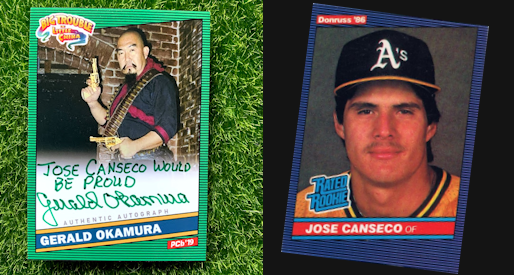 Now, I honestly don't think many read my blog posts.  Not that that's a bad thing.  I just do a little write up with new cards to give a little insight to my thoughts when deciding how the cards will look.  But, in the event that you're reading this and you've added Series 1 to your collection, don't worry, I've got you covered and your card is on the way.  If you've picked up Series 1 and 2 then you've got the new card and the special Gerald Okamura auto card coming your way.  Thirdly, if you've got Series 1 already and add Series 2 at any point the Gerald Okamura card will be included.

Posted by phantomcardboard at 8:20 AM