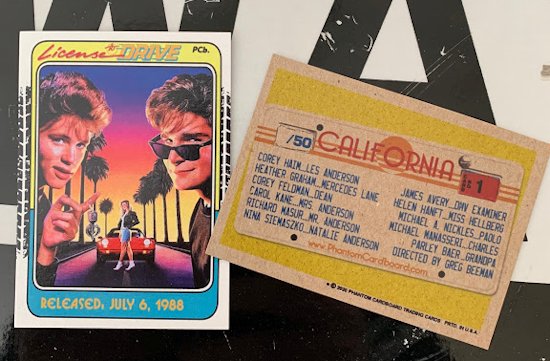 When you talk about quintessentially '80s movies I have to believe License to Drive makes the short lists, especially when talking about teen comedies. It's got everything you need.  The look, the music and the Coreys at the height of "Corey Mania".

In doing my research for the card set I watched a number of interviews both from when the movie was released and years later that had the actors looking back on the experience.  It made me a bit sad because it really did seem like Corey Haim was a sweet person who was chewed up and spit out but the dark side of Hollywood.  License to Drive was Heather Graham's first big movie and Corey Feldman, thankfully, was able to resist doing Michael Jackson dance moves in the film. 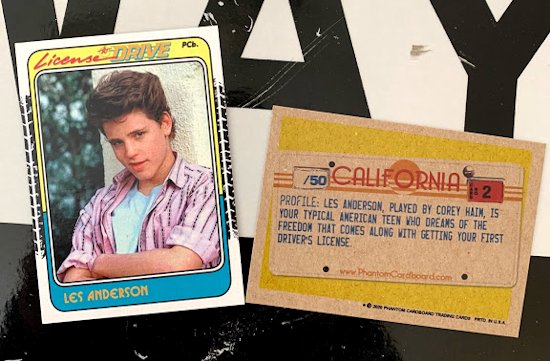 I've had this movie in mind as a card set for awhile but couldn't quite pair it to a vintage inspired trading card design that I thought would lend well to it.  The reason I like to use trading card designs that match the year of the movie's release is it gives you a mental place marker for when the movie was out.  License to Drive SHOULD have had a proper trading card release, but it didn't.  So, rather than guess at what a 1988 design for a License to Drive trading card set *might* have looked like I framed it in a card design that *did* come out that year.  I just feel it adds a bit more of a authenticity to the set.

The design I landed on was 1988-89 Fleer basketball.  It's really nostalgic for me personally because I was heavy into basketball cards at the time. There are some baseball set that, while they may be more recognizable, didn't give me the same creative "fit" as I pictured with this Fleer design.

Once I settled on a design it was almost overwhelming with all the possibilities that I was thinking could be with an automotive theme.  Eventually I pictured something that could marry the '88-'89's design while incorporating some automotive elements and at the same time not going overboard.

For the card front I incorporated some of the colors that are found on the movies' logo.  Just as a side note, I noticed that the License to Drive logo used the same color pallet as the classic MTV logo.  That's a genius subliminal.  A correlation to MTV, especially in 1988 when it was still a music video channel the way our forefathers intended, would be a perfect marketing fit for this movie's target audience.  Even though the font style of the '88-'89 Fleer is pretty irregular I kept it for the card's captions to really give the eye something to volley the set's original look to this movie adaptation look.  The tire tracks in place of the gradient that was on the side of the Fleer is another attempt to give the cards a License to Drive theme while maintaining the spirit of the original design. 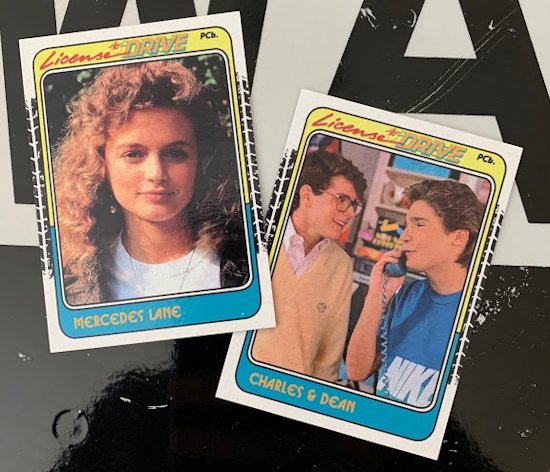 Some of the images I was finding just wouldn't work well put into a vertical layout , you'd lose a lot, so I went ahead and also made a horizontal template too.  It was a bit of a pain because at that point I was eager to get on with the fun part of making the actual cards, but it was something that I felt needed to be done.  It's a little extra that was definitely worth it.

The card backs is where I started to freestyle.  I just couldn't see it being a fun card back with mimicking the backs of the original cards.  I had a bunch of different ideas but then it sort of hit me that a license plate would be an absolutely perfect creative complement. It's a California plate, the same style plate that was used on Les' Grandpa's Cadillac.  The tabs were perfect for use as the sequential numbering spot and card numbers.  In addition, the font is a license plate style lettering. 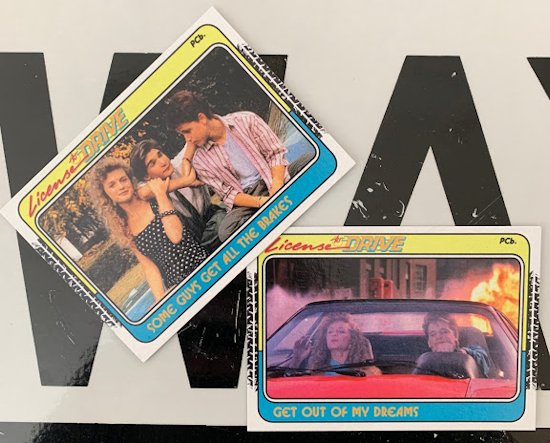 This set ended up being 22 total cards.  For the backs I was thinking of doing some storyboard synopsis to the scene on the front, but then I reasoned someone who would want this set is going to be familiar with the movie.  Stuff like quotes and little known facts and trivia are the type of stuff I'm into, so that's what you get on the backs of this set.  The first card in the set is a title card, so it's got the cast listed on the card back.  Then you've got 4 character profile backs, 1 quote back, 14 film fact backs and 3 trivia backs. 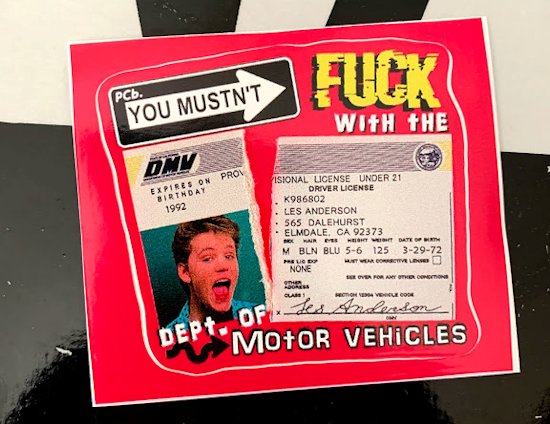 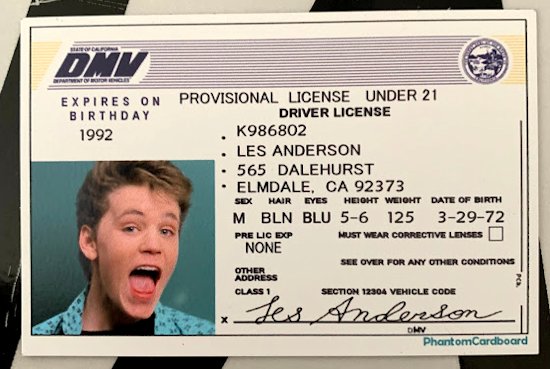 Awhile back I made a movie accurate Les Anderson driver's license.  I wanted to incorporate it somehow.  What I came up with is a die cut sticker (approx. 3" x 2.5") that comes with the set. 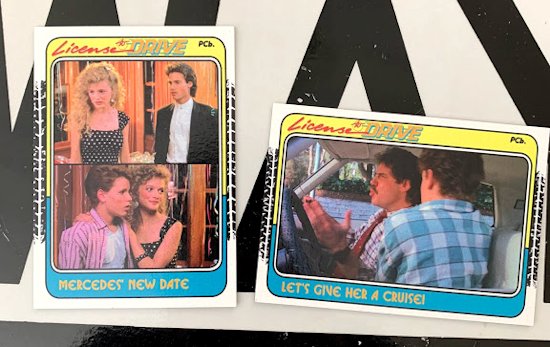 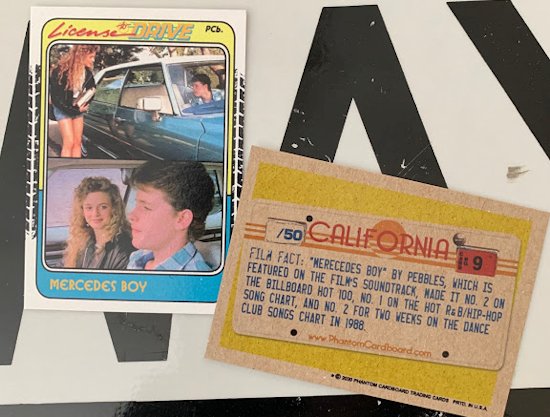 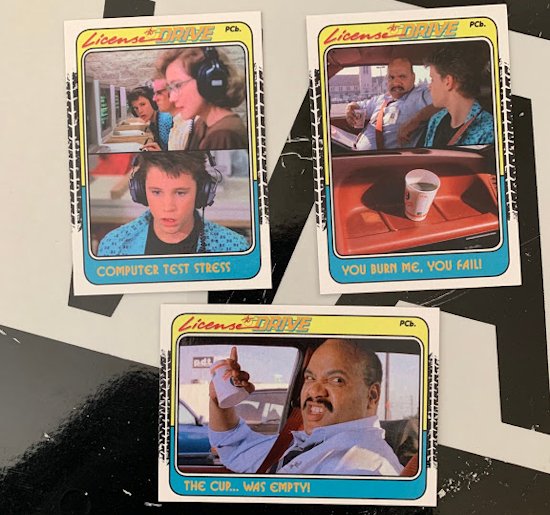 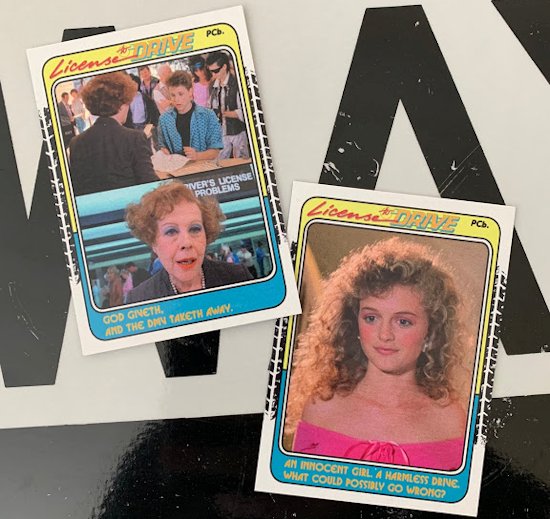 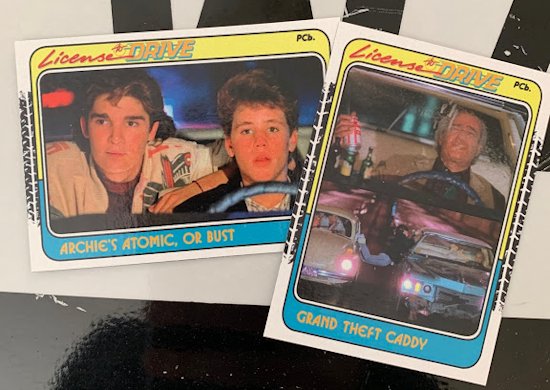 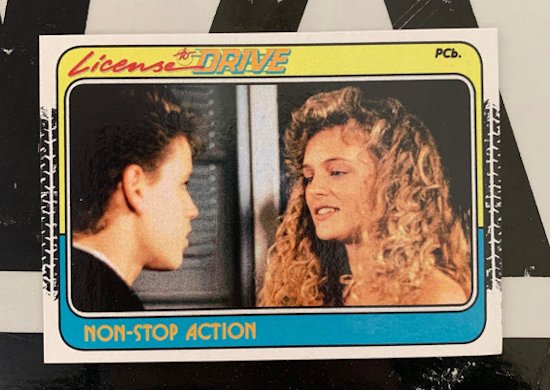 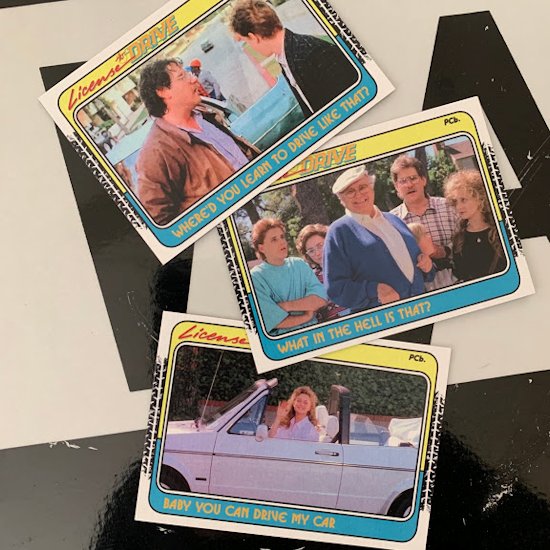 Posted by phantomcardboard at 9:42 AM