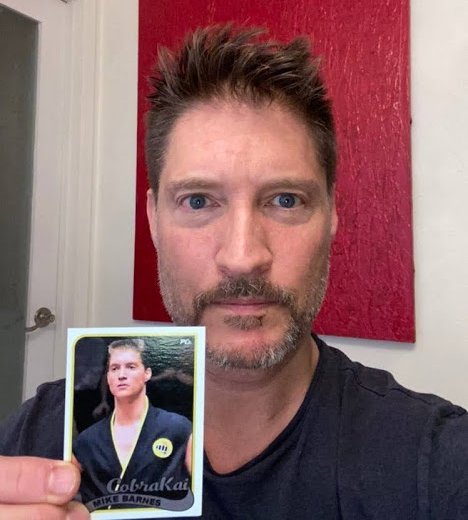 This is the third post in a row where I say I don't like going back to cards I've made in the past and modifying them and then showing off a modified version of one of my older cards.  Unless something comes up, this is the last one.

As most of the readers know by now the Karate Kid trilogy is my shit.  I even heard rumors that there was a 4th installment and a remake, but I don't believe that.  The Cobra Kai series is pretty bitchin' though ;)  Back to the trilogy ... I love all three of those movies.  The 1984 original is my favorite, but I would have to say that I've seen the third one the most due to its heavy rotation in the early '90s HBO lineup.

You can imagine my excitement when I was asked by Sean Kanan - a.k.a "Karate's Bad Boy, Mike Barnes"- to provide some cards for an Instagram signing event he was doing for fans.  He had seen the Mike Barnes card I made back in 2016 based on the 1989 Topps baseball design and inquired about using it for the signing.

I had paired that Mike Barnes card with John Kreese and Terry Silver cards and have been offering it as a 3 card mini-set.  I wanted to change the card somewhat to make it different from the card in that set.  The reason is I want to maintain the integrity of the Mike Barnes cards that are out there and sequentially numbered to 50.  I believe in that numbering and I want others to as well.  If I would have made up the remaining /50 inventory for Sean than that would have put an end to the mini-set.  So, I made slight changes to make it different.

I removed the "Karate's Bad Boy" sash that was in the upper left and I added a small PCb. logo.  The most significant change however came in the form of a card back that resembled the '89 Topps, instead of the stamped back you get with the 3 card mini-set. 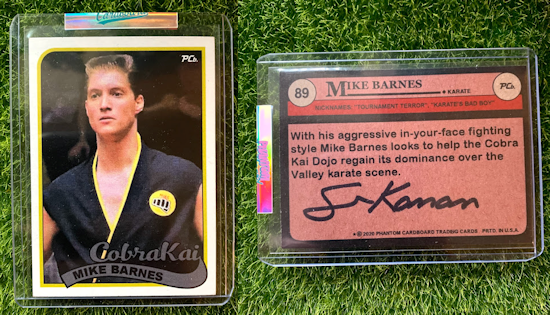 Posted by phantomcardboard at 8:52 AM