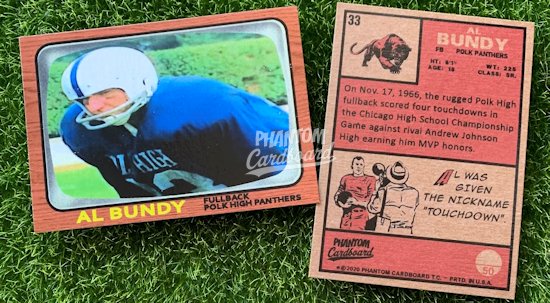 Like I went into explaining in my last post, I like to leave cards alone once they're done... but, here is another exception to that rule.

I was contacted about doing an Al Bundy football card for a private signing.  Since I'd already made an Al Bundy football card some time back I suggested using that one.  That card was agreed upon but the requester wanted a card back.  Since the card was made in 2018 when I was just using my logo stamped back, it did not have its own unique reverse.  My philosophy was for the longest time that it was all about the card's front side.  That was especially true for the fact that I was originally making these cards exclusively for myself in an effort to see if I could get them autographed.  Once you've got the card autographed who the hell cares what's on back, right?  Well, I've come to see the error of my ways and I've realized that a custom card's back can nearly have a much charm as the card's front if given equal time and thought.

So, I agreed to do a back for this card.  Just because, I looked to see if perhaps there were any usable Al Bundy football pics I might have missed the first time around.  I knew I was going to use the same 1966 Topps football inspired design (four touchdowns in the '66 championship game, baby!) but I was wanting to remix this card a bit for this requester's private signing.  Low and behold I found an image that I dare say is as good, if not better with this card.

After completing the back I pretty much fell in love with this card.  I actually didn't want to put it out there because I didn't want to, in a sense, kill the original Al football card.  But, I guess they both have to exist because basically I just really like the way this came out.  I think that all of us that grew up with Al "Touchdown" Bundy can appreciate yet another custom of this legend.

Posted by phantomcardboard at 7:28 AM