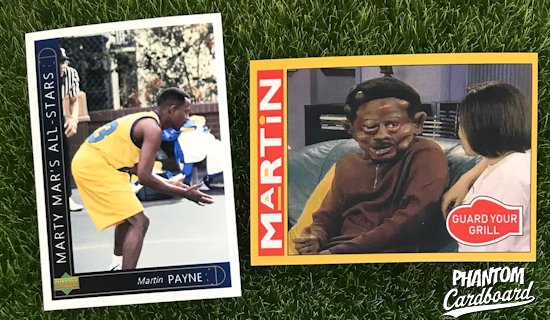 Martin was another show I watched a lot of back in the '90s when I didn't have cable.  When it was syndicated on whichever of the big channels it was on I probably watched it every day.  Of course I dug that it was based in Detroit and Martin is a funny dude.  Martin Lawrence for awhile was the "it" comedian, sort of like Kevin Hart is these days.

These cards came to be when I saw a picture of Martin playing basketball form an episode where his mouth gets him in trouble when he scoffs at the idea of women being able to do anything as well as a man, especially sports.  Gina teaches him a lesson setting up a basketball game pitting Martin and his "Marty Mar All-Stars" against some friends of hers that just happen to be the 1996 Woman's United States Olympic Basketball team.  I chose to do the basketball card is in the style of the 1993-94 Upper Deck set.

While creating the basketball card I was reminded of the most memorable image --for me at least-- from the Martin show.  It's from the Season 2 episode "Guard Your Grill" where Martin defends Gina's honor in a charity boxing match against one of Detroit's most favorite sons, Thomas "Hitman" Hearns.  Needless to say ol' Marty Mar got lumped up.  This card is done in the style of Topps' 1979 Rocky II set.  This was the first time using this set for me.  It's simple, but a pretty recognizable non-sports card set from back-in-the-day.

Posted by phantomcardboard at 5:59 PM