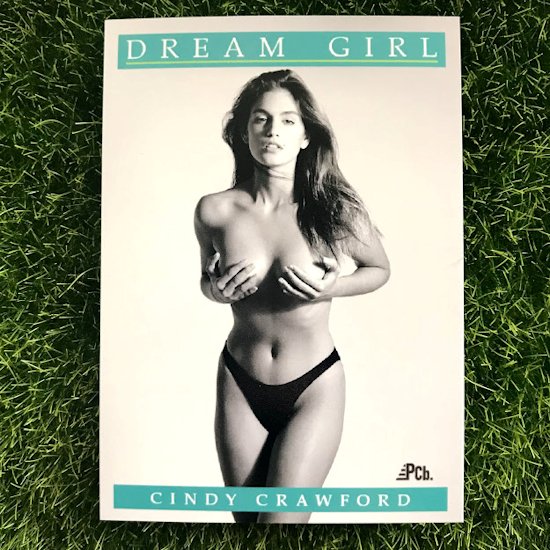 I was pretty certain that when I made my Anna Nicole Smith Dream Girl card I was eventually going to use that design again; all it would take was the right babe in a nice black and white photo.  The time to re-up has come much sooner than later.

I've written before about my infatuation with Cindy Crawford in a previous post.  I ran across this particular image and instantly recognized it from the first Playboy magazine I ever bought.  I was 18 and it was a special edition on Cindy herself ....or it might have even been a compilation of celebrities that had graced the pages of Playboy magazine, either way I remember the purchase's circumstances very vividly.  I remember that even though I was of age to buy a nudie magazine I was still pretty red faced and embarrassed putting it on the counter.  I spotted it the day before but didn't have the guts to buy it.  This is pre-internet and I couldn't get the prospect of the glory of what was between those pages out of my head, so I went back to the party store at the corner of my street the very next day.  I waited until I was the only one in there and I sheepishly put it on the counter and tried to avoid eye contact with the shady dude behind the counter that used to keep my younger brother's change when he'd buy candy telling him "we'll call it even, boss".  He did give me my change and I hurriedly walked out holding the book with the cover pressed against my chest.  Lame, I know.  I didn't have that issue for long.  It was lost although I'd pretty sure a friend of mine that I guess didn't have the fortitude that I did to buy a copy from that store "borrowed" it without my permission never to return it - shady as hell, but hard to blame the guy.
Posted by phantomcardboard at 12:42 PM