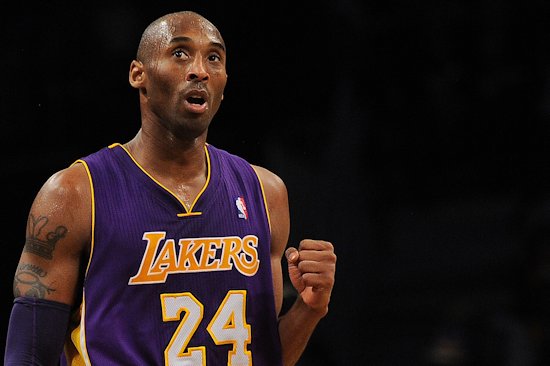 When Kobe Bryant perished in a helicopter crash this past January I was affected by the news as much as any celebrity death in my lifetime.  I remember sitting on my sofa in shock not really believing it could be true.  "Not Kobe, anyone but Kobe!"  I kept expecting to see a breaking update that Kobe had actually survived having jumped out of the helicopter moments before it crashed in true "Mamba Mentality" fashion.

As I've written on here before basketball is my favorite sport.  I grew up with the Bad Boy Pistons, so I pretty much hated every other team and star players because there was this notion that they hated us.  I've carried that type of fandom throughout my life.  I don't like the hoops darlings that the NBA tries to sell.  I like guys that are gritty, win at all cost non-prima donna types.  Kobe was that in my eyes.  He wanted to be the best as opposed to teaming up with the best.  I also was drawn to him because he was a thinker who was always intensely studying the world around him.  Couple that to the fact that he always came off as a "real" dude.  So many superstars I feel are cliché spouting cornballs.

I drew parallels with myself and Kobe Bryant. We're the same age and are both fathers of four.  From all accounts he was every bit the dad as he was the basketball player, if not more, and that devastated me to think about his three girls that lost their superhero of a father and a sister that was also on that ill-fated helicopter ride. 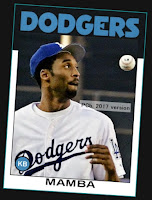 I made a Kobe card back in 2017 when I was plugging in celebrity ceremonial first pitchers in a 1986 Topps inspired design.  I've improved on my cards since then so I revisited that card and gave it new life with some touch ups and a card back commemorating his ceremonial pitch for the Dodgers back in the year 2000.

When Kobe passed away I was asked if I was going to do a card of him.  I didn't rule it out, but to just hurry up and do a card because he died seemed like bad form to me.  It had to be the 'right' card if I were to make one at all.

I've expressed my love for the 1991 Score subsets on here before.  One that I've always wanted to recreate was the Master Blaster subset -- there was also the K-Man and Rifleman subsets which were essentially the same thing with a different color laser burst background.  Like my reservation on a new Kobe card, it had to be the right Master Blaster card and not just any ol' picture thrown in there.  I finally came across some images that satisfied the prerequisites of being the 'right' fit.  The pictures, I assume, are media day pictures and probably for a cross marketing promotion done between the Lakers and Dodgers.

The two cards work in tandem to pay tribute to both Kobe's #8 and #24 eras.  I spent a lot of time on these particular cards and am satisfied that they're fitting tributes to a legend taken far too soon.

Posted by phantomcardboard at 8:58 AM