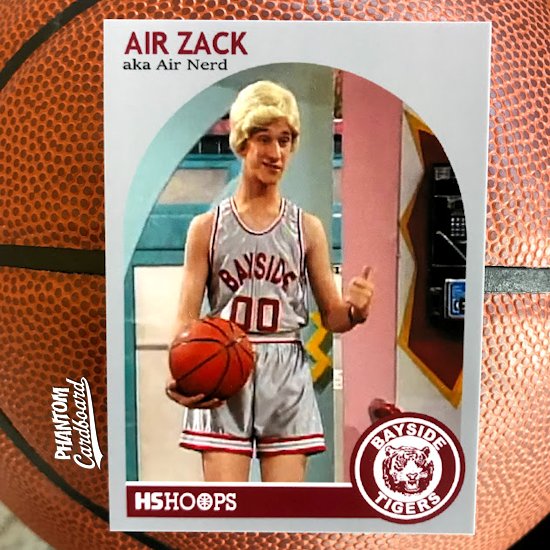 I've revisited this Zack Morris card I made back in May of 2017 and have added another card to make it a 2 card mini-set.

At the beginning of that same episode Zack is sitting in the Max stressing over finishing a take home test.  Enter Slater and Kelly all worried that Zack, team captain, isn't going to make the pep rally.  The ever scheming Zack tells that he's got it covered and in walks Screech exclaiming that he can be called Air Zack to which Slater quips "more like air nerd".  And there you have, a custom card is born. 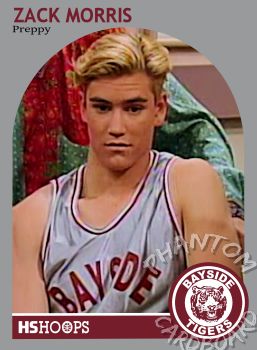 Hey, remember that time right before the big championship game that Zack tripped over Mr. Belding and hurt his knee so bad that he had to have surgery that was preformed by Lisa Turtle's mom?? Good times.  So good in fact that there should have been a basketball card produced...

For this card I chose the 1990-91 NBA Hoops set to emulate.  A couple things to take note of; this is
the first card I put a brand on, sort of.  I never put Topps or Donruss etc. because I'm not trying to pass it off as one of their cards but rather a fantasy (or phantom if you will) card with a vintage inspired design.  The area that would normally display "NBA Hoops" looks incredibly bare with nothing in it.  To remedy this I put "HS Hoops" (i.e. High School Hoops) down there, which beat out "TV Hoops". Secondly in the text that would usually read the player's position I had a little fun and put "Preppy".  In the episode it was never revealed what position Zack played, I would assume forward?  Slater does state however that Zack's the team captain, which is what I originally had there before changing it to preppy.

I couldn't find a good enough picture online from the episode so I decided to try to get my own screen capture.  After quite awhile of trying to get screen shots of a few different scenes this was the best one I came up with.  I doctored it a bit, but that's as crisp as I could get it.

Okay ... now here's where things get interesting.  When I went to pull a Bayside Tigers logo I noticed that every single example I found online just looked different than I remember.  It then dawned on me what exactly it was.  At some point the Bayside Tiger was replaced with an impostor tiger and everyone just went with it, and bought the t-shirt.  Everyone that is expect for me. You see I recalled the tiger bearing a striking similarity to my hometown Detroit Tigers logo at the time.  And, as it turns out, my memory served me well. 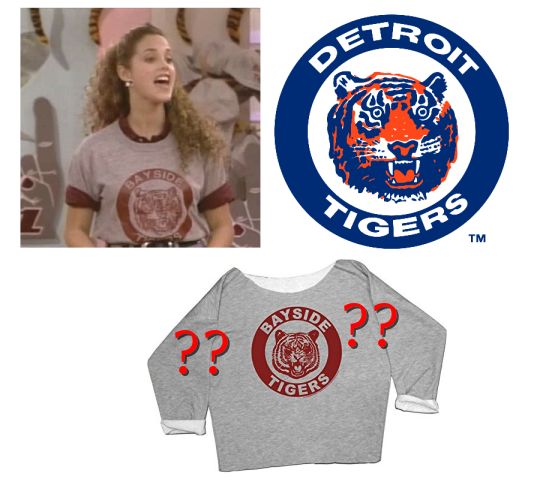