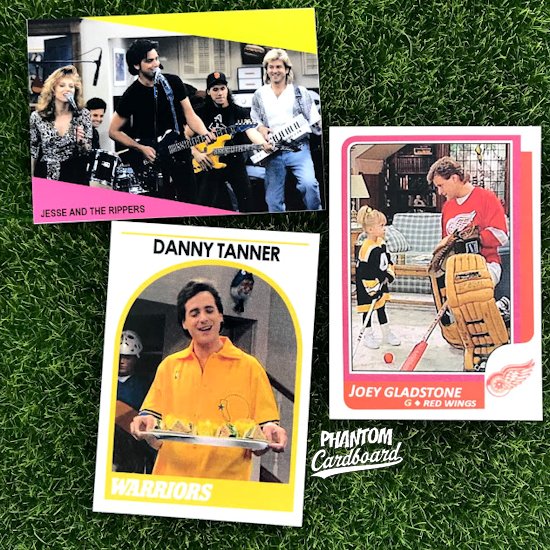 I was never the biggest Full House fan.  I thought it was a show for girls, and girls younger than I was in the early '90s when the show was at its height of popularity.  No, I was more of a Married... With Children, In Living Color type than I was any of the TGIF lineup shows that were just a little too campy for my taste.  Now, that's not say I haven't seen my share of Full House episodes.  Who hasn't?  I don't think anyone can deny the shows place in popular culture for anyone who grew up in the '80s and '90s.

I came across a a picture of Danny Tanner in a Golden State Warriors warm up.  It was in a meme poking fun at bandwagon Warriors fans. Of course that had to be a card.  The image is from a 1988 episode of Full house and I thought it would be fun in the 1989-90 NBA Hoops inspired template.

The I got to wondering if there was any other cards that could be made from the show or should I just cut it out? (God, I'm so embarrassed for myself)  I remember a couple times Dave Coulier, a Michigan native, wore Detroit sports team gear.  A quick image search revealed a picture of "Uncle Joey" in full Red Wings goalie gear playing a little Tanner living room hockey against one of those Olsen girls. You got it, dude! (I'm a loser) Threw that image in the 1986 Topps hockey inspired design.  The reason being was that I've done a few other Red Wings fantasy cards in the same template so why break with tradition?  Two Full House cards.

Was there anymore I could squeeze out of this syndication monster?  Enter the 3rd adult male living in the home helping to raise three young girls.  Jesse Katsopolis may not have been the sportiest of uncles, but the dude sure could easy rock out.  Jesse and his Rippers are definitely worthy of a 1991 ProSet MusiCards tribute.

So, there you have it.  Three cards from a show I never watched but have probably seen every episode of.
Posted by phantomcardboard at 8:01 PM