This Is Pure Poppycock!


I’ve been working on this Dodgeball set off and on for awhile now; every so often adding another member of Average Joe’s or a Purple Cobra.  Then, as it usually seems to happen with my card sets, I sat down and watched the movies and it took my inspiration for the cards to the next level.

I had originally planned on just making the two teams, but after watching I knew there were a few hilarious ancillary cards that had to be a part of the mini-set. 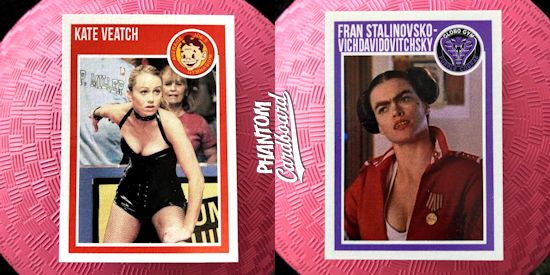 If you’ve not watched Dodgeball in awhile it’s worth a rewatch.  If you’re pressed for time at least pick it up from the point where the dodgeball tournament starts.  It’s a quotefest.  Pepper f’n Brooks, man.

I’m a fan of most anything Ben Stiller is in.  I dig his brand of humor especially when he plays that sort of put upon character like in Meet the Parents.  Vince Vaughn is palatable but I defy anyone to find me a movie, this one included, where he isn’t the same. exact. character.  Has no one caught on to this?  He plays the same fast talking wise-ass character, literally, in every movie he’s ever been in.

For the card set I chose a 1989-90 Fleer basketball inspired theme.  I liked the idea of using each of the two teams logos with the color coordinated border. 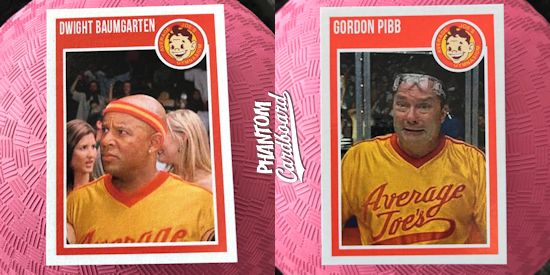 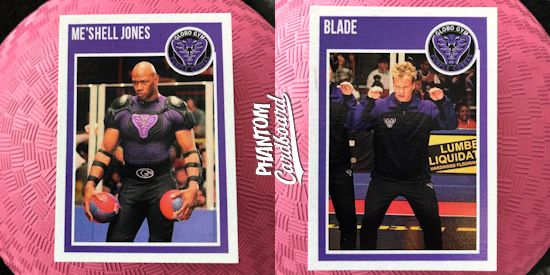 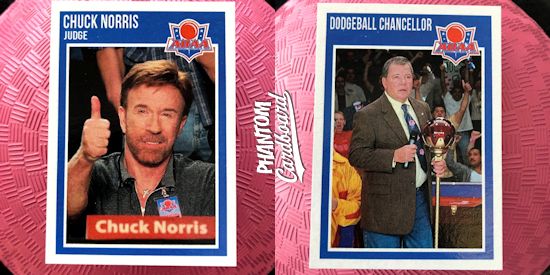 For the Chuck Norris and Chancellor card it took awhile to track down a movie accurate ADAA logo.  There's one out there that is close but I would know the difference and that would never do.  Same deal I talked about with the Bayside Tigers logo.

Posted by phantomcardboard at 7:31 PM