Update:
Per the genius suggestion of an Instagram user I've added a 1977 Topps Star Wars style card to make a Step Brothers two card Phan Pack.  I actually wanted to make a "Boats 'N Hoes" Yo! MTV Raps style card but I shockingly could not find one quality screen capture image of that video :( 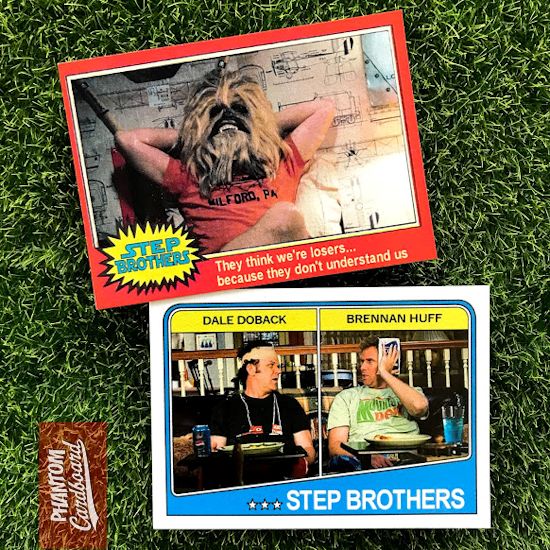 Step Brothers may not fit the nostalgic vintage theme that most of my cards share but I think it still qualifies as something the is universally loved and could benefit from a Phantom Cardboard treatment.

This card was more about the card design than the subject.  Don't get me wrong, I'm a fan Step Brothers.  The movie is about as quotable as it gets.  But, I've been wanting to use the 1988 Topps football design for something.  One thing that has kept me from using it for all this time is I really don't know how I feel about the two-tone gradient colors that all the base cards have.  Then, I ran across an picture of the Jerry Rice / Jim Breech Scoring Leaders card.  I personally remember pulling that card out of a pack of '88 Topps football.  That was a big card to get back then.  Jerry Rice was a favorite of mine.  I think he was a favorite of everyone's.  The 49ers were kind of like "America's Team" back then.  Or, at least it seemed that way to me.  I liked this one design for my card because it didn't have the two-tone gradient like the player base cards, or a team helmet for that matter.

I made the template and then plugged in the post-brawl picture of Dale and Brennan with my fingers crossed that it lined up with the the card's split frame ... and it did, perfectly.
Posted by phantomcardboard at 10:02 AM